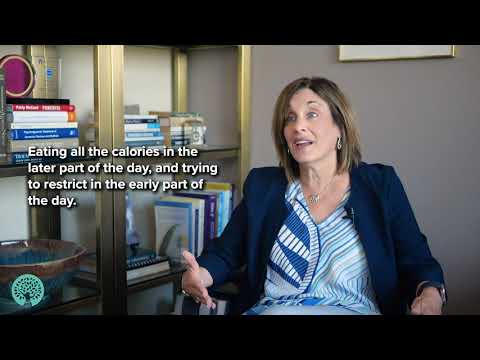 Learn about the symptoms and warning signs associated with compulsive overeating.

Symptoms of compulsive overeating are varied and diverse.

Compulsive overeating can involve binge eating (consumption of a large amount of food in less than two hours) without the use of compensatory behaviors to expel calories consumed, but it can also involve other loss-of-control eating behaviors.

Common Compulsive Overeating symptoms include:
Eating what most people would think is an unusually large amount of food
Eating much more quickly than usual, or eating slowly and consistently throughout the day and/or night
Eating past satiety or until feeling uncomfortably full
Eating despite feeling full or not feeling hungry at all
Eating alone due to shame or embarrassment about the quantity of food consumed
Feeling disgusted, depressed or guilty after overeating
Loss-of-control eating, including but not limited to night eating, nocturnal related eating, eating past satiety, impulsive eating and compulsive food behaviors like hiding food, food obtaining and eating food out of the garbage.

Eating Disorders Help in Portland-Do you Suffer from Body Shame due to Binge Eating? Food Is Not The Enemy can Help with Over Eating Issues Caused by Trauma, Located in Portland, Or 97202 Call Anne Cuthbert-Licensed Professional Counselor for Private Eating Disorder Counseling at (503) 766-3399

Food Is Not The Enemy, by fuseology