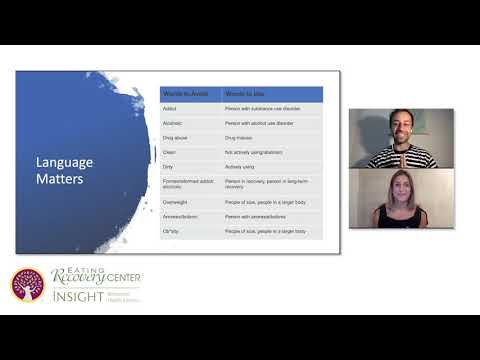 Recovery from mental illness is not a perfect path. It is often one full of many ups and downs, trips and stumbles. It can often be seductive to look for the numb button when emotions and experiences become overwhelming. If this is something you identify with then you are far from alone. Every year in the United States 20 million Americans suffer from some form of Substance Use Disorder. According to the National Eating Disorder Association, “Up to 50% of individuals with eating disorders abused alcohol or illicit drugs, a rate five times higher than the general population. Up to 35% of individuals who abused or were dependent on alcohol or other drugs have also had eating disorders, a rate 11 times greater than the general population.”

What is the line between abuse and addiction? What lies beneath addiction and substance abuse? How is recovery from addiction similar and different from recovery from eating disorders?

In our September Say It Brave, join Niki DuBois, LMSW, and Eric Dorsa Recovery Ambassador Council Member, as they discuss what lies beneath addiction and substance use, the similarities and differences, and how recovery from both is possible.

By: Eating Recovery Center
Title: Say It Brave “What Lies Beneath – A Conversation About Substance Use Disorder and Eating Disorders”
Sourced From: www.youtube.com/watch?v=gi5aDacQj9w

Eating Disorders Help in Portland-Do you Suffer from Body Shame due to Binge Eating? Food Is Not The Enemy can Help with Over Eating Issues Caused by Trauma, Located in Portland, Or 97202 Call Anne Cuthbert-Licensed Professional Counselor for Private Eating Disorder Counseling at (503) 766-3399

Food Is Not The Enemy, by fuseology